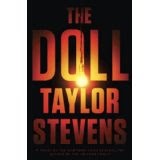 The Doll by Taylor Stevens is a thriller with heart-racing action, unexpected twists and dangerous turns.

The main character, Vanessa Munroe, can change herself and "become" whatever she needs to be to survive.  She's a fighter. More importantly, she is a survivor. In The Doll, she gets kidnapped and taken into an underground world in Dallas where women and girls are sold, used and abused.  This world and the women forced there are controlled by a man known as the Doll Maker. He captures women and young girls and sells them.

Munroe has not only herself to save, but also a young girl, Neeva, who also has escaped. Munroe doesn't want to be saddled with Neeva, but Munroe knows if she doesn't take Neeva with her, Neeva will either be killed or taken back into slavery.

Munroe is used to violence. Most of her life has been marked by violence. She can speak multiple languages and she knows how to fight and how to survive. She could escape and disappear into the shadows, but she'll have to take Neeva back to the Doll Maker, even though she knows what will happen to her.

Munroe will have to decide between Neeva and someone she dearly loves. I give The Doll a rating of Hel-of-a-Ride.
~~~~~~~~~~~~~~~
This is a dark book. Women and young girls being kidnapped and used in sex trade. It took me a while to realize the book was set, not in some far away country, but in Dallas. But the story moves at a fast clip and will keep you turning pages.
Posted by Helen Ginger at 12:03 AM