Today, I'm doing a post about Dr.Jeffrey Stuart Kerr -- author, pediatric neurologist, husband, father, and historian. When he started at Rice University, he planned on becoming a writer and historian, but practical consideration prevailed, and in 1984 he took his medical degree from Texas A&M University, then did a residency at Wake Forest University.

Since then, he, his wife and two (grown) children moved back to Texas and he now practices in Austin. He also writes. 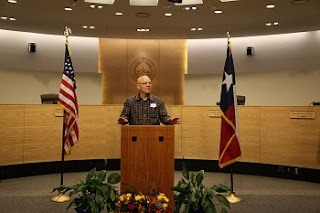 Kerr spent 18 months researching, writing, and publishing his first book, Austin, Texas-Then and Now, a Finalist for the Writers League of Texas Book Award. To date, over 7,000 copies have been sold.

The Republic of Austin (Waterloo Press, 2010), Kerr's second book, is now in its third printing.

Here's a review snippet from True West Magazine:
"Seat of Empire is the most thorough history of the dynamic personalities, political intrigue and powerful self-interests of empire, nation building and manifest destiny that led to the birth of the Texas capital." True West Magazine

At the end of this post, you'll find information on how to win a signed hardback copy of Seat of Empire, as well as information on the upcoming Austin launch of his book.

Here's a brief excerpt from Seat of Empire: The Embattled Birth of Austin, Texas:
In the fall of 1838, the tiny hamlet of Waterloo, Texas welcomed the most important visitor in its brief history.  At the time, the town had not yet even been incorporated, Congress not taking that step until the following January.  Lying farther up the Colorado River than any other Anglo settlement, Waterloo presented a humble appearance to the dignitary and his entourage. Only a few log cabins scattered around the mouth of Shoal Creek greeted Willis Avery, James C. Rice, and four other Texas Rangers along as guardians against Indian attack.  The Reverend Edward Fontaine, friend of the important man, accompanied the group, and may have had his slave Jacob with him. Commanding the greatest attention, however, was the Georgia native, San Jacinto hero, and highest ranking member of the entourage, Mirabeau B. Lamar, Vice-President of the Republic of Texas.
Lamar coveted the presidency.  He seemed fated to get it.  His most formidable political opponent, President Sam Houston, was constitutionally barred from succeeding himself.  Two other leading challengers, Peter Grayson and James Collinsworth, had incredibly committed suicide within two days of each  other.  On July 9th, while traveling through Tennessee, the unstable Grayson wrote a note begging his landlord to “pardon the frightful scene I have made in your house” and “blew his braines out with a pistol.” After Supreme Court Chief Justice James Collinsworth publicly announced his candidacy June 30th, he went on a drinking spree that culminated July 11th in his jumping or falling off of a boat into Galveston Bay.  Most people believed his drowning death was suicide.
Lamar thus seemed a guaranteed victor in the coming election.  His friends, however, urged him to take nothing for granted.  In June Senator Albert C. Horton, a vice-presidential candidate, advised a trip west to court the frontier vote. Judge James Webb also saw political advantage in a western journey:
It is the opinion of several of your friends with whom I have conversed,     that a trip up the Country would be serviceable to you.  I think so too-There is no telling what impression may be made on the minds of the people on the eve of the Election-you know by whom the effort will be made, if made at all, & you therefore know in what section of the Country to expect it-In Houston & all the lower part of the Country, there is no danger.
Lamar evidently saw wisdom in his friends’ advice, for he made the risky journey.  Once at Bastrop he was well into dangerous frontier territory.  After leaving the town and crossing the Colorado River, the vice-president and his companions meandered through a lush landscape of tall grass and scattered woods before fording the river again and stopping at Josiah Wilbarger’s place on Wilbarger Creek.  The party then traversed Webber’s Prairie, passed Hornsby’s Bend, and paused to rest at Fort Coleman on Walnut Creek. The stockade most likely offered little protection.  After its abandonment the preceding April, local residents had quickly begun dismantling its walls and blockhouses to make use of the lumber in other construction projects. Once beyond the remains of the fort, the party waded through several more miles of grassland before reaching Waterloo.
__________
You can connect with Jeffrey Kerr on Facebook.