That Voodoo That You Do, Dr. Mesmer!

Animal Magnetism. When we hear those words now, we think of some steamy chemistry between us and the object of our desire, but the original term was coined by Dr. Franz Mesmer, a German physician from the 18th century. He used the term to describe the relationship between humans and everything else. The concept was based on the theory that everything in the universe is somehow connected. Mesmer believed that the life force, or "vital fluid," within a person could get blocked, interrupting the natural flow and causing illness. It's quite similar to the Chinese "Chi" and other Eastern Traditions and Medicines. Although Dr. Mesmer isn't really known for animal magnetism, he is more known for Mesmerism, a term stemming from his own name. Dr. Mesmer would sit before his patients and look deeply into their eyes, whiles his hands hovered all over the bodies. These people felt deep changes and often went into convulsions. Mesmer's followers were amazed at the altered states of these people and the power of suggestion. They took mesmerism across Europe throughout the late 18th and early 19th centuries.

A Scottish Physician named James Braid took the practice of Mesmerism a step further, coining the term "hypnotism." Braid practiced his expanded method extensively as well as gave lectures on the subject. He is known as the Father of Modern Hypnosis and is the first hypnotherapist.

The mad psychiatrist Dr. Zachariah Pilkington in The Zombies of Mesmer was a student of Dr. Braid's, but normal hypnotism wasn't enough for Dr. Pilkington. With it, he mixed steampunk technology in order to mesmerize masses. First he used it as a means to control his rowdy patients at Bedlam, but then his delusions of grandeur took over. This sociopath builds an entire army of mesmerized zombies, and he has set his sights on controlling Queen Victoria, herself, in order to rule England and thereby the world. It is, of course, up to Nickie Nick to stop him.

The Zombies of Mesmer - Blurb
Follow Nicole Knickerbocker Hawthorn (Nickie Nick) as she discovers her destiny as The Protector, a powerful vampire hunter. Ashe, a dark and mysterious stranger, helps Nickie and her friends solve the mystery behind several bizarre disappearances. Suitable for teens, enjoyed by adults, the story is full of interesting steampunk gadgets, mad scientists, bloodthirsty vampires, and mesmerized zombies. This paranormal adventure is sure to appeal to fans of Boneshaker, Buffy the Vampire Slayer, and the Vampire Diaries.

Steamy magnetism and sultry mesmerism find their way into most of my romantic work. Even the darker side of seduction, a more realistic look at some liaisons, containing things like betrayal and manipulation, have their place on the pages of my fiction and nonfiction, alike. Please read more on my blog Caught in the Cogs where you can find a plethora of relationship essays, mostly focused on the darker side of love and alternative relationships, as well as free fiction, podcasted fiction and nonfiction, and love poetry. 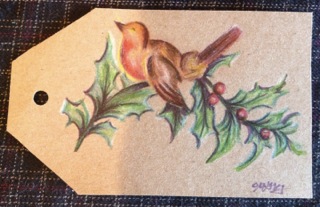 Special thanks to Helen for hosting me and my Gothic Victorian Holiday Giveaway today. This package includes all three of my books (The Amazon.com Gothic Romance best-selling novel Avalon Revisited, the YA Steampunk Paranormal Romance The Zombies of Mesmer, and my collection of short stories, love poetry, and relationship essays Caught in the Cogs: An Eclectic Collection), all gift-wrapped in Victorian finery and  adorned with a wax seal and a handmade antique gift tag. I drew the bird illustration myself, and the back will have the recipient and gift-giver penned in calligraphy. On top of all this, you will also get your very own Amigurumi Voodoo Doll, crocheted by me. It comes with its very own pin, so you can do what you will to whomever you will. Visit my blog today for folklore on the Voodoo Doll and how to personalize your very own Voodoo Doll, as well as the Amigurumi pattern I used to create this little guy. 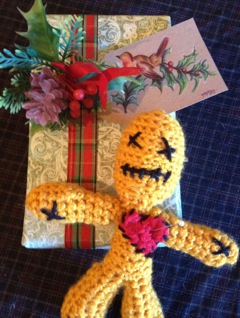 Enter to win this great giveaway simply by commenting below and asking me a question. The contest is open through Friday, November 30th. I'll be announcing the winner on December 1st over on my blog as well as in the comments here. Your comment below gives you one entry. Gain more entries by Tweeting, sharing on Facebook, Tumblr, and Goodreads. 5 more entries for each share, just be sure to make a note of what you do and where you share in the comments below. If you tweet, make sure and tag me @omgrey. PLUS, you can gain 25 more entries for buying one of my books, either in paperback or on Kindle/eBook. Just state that you did so below and email a copy of your receipt to steampunkgrey (at) gmail.

Each day this week I'm visiting a different blog and giving away something new. Join me around cyberspace and enter often! Check my blog for the entire schedule and see how you can win A KINDLE!

Buy The Zombies of Mesmer on Amazon in paperback or the Kindle . Buy Avalon Revisited on Amazon in paperback or on the Kindle, also available via Barnes & Noble and wherever books are sold. Buy Caught in the Cogs in paperback or on the Kindle .
Please find out more about me and my work, listen to free podcasts, read free short stories and poetry, and get author-signed books on my blog Caught in the Cogs . I would also simply love for you to connect with me on social networks like Facebook, Twitter, and GoodReads. Indeed!
Posted by Helen Ginger at 12:01 AM