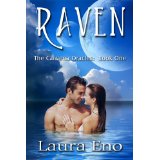 Raven by Laura Eno is a sci-fi book (or, as Eno calls it on her blog – a Sci/Fi Space Opera). (I’m reading more and more science fiction lately – and liking it.) Raven is the captain of her own spaceship. She even has an implant that hooks her up to the ship’s navigational system. Other than her co-pilot, Ben, she’s pretty much a loner. That’s about to change though. She’s picking up a client, Mikael, for transport. She thinks it’ll be an easy job. But Mikael comes with a bit of baggage, and I don’t mean suitcases. ‘Course, Raven has her own past – at 19 she was sold at auction to be a breeder.

The three of them join forces to find the Oracles. They’re not the only ones looking, though.

Eno keeps the action going with enough pauses to let you catch your breath and for Raven and Mikael to develop their relationship.

All three of these main characters are interesting. I liked Raven because she’s something of a loner who realizes she needs to connect with someone. And she’s a strong person. Mikael is the person through whose eyes you get to see the ship and the empty space they travel through. Ben is interesting because he’s not human and may be the key to finding the Oracles.

The story moves quickly with action and questions. Raven and Mikael are attracted to each other, so there’s a bit of a love story included.

This is not the first book I’ve read by Laura Eno – and she hasn’t let me down yet.

I give Raven a rating of Hel-of-a-Story.

~~~~~~~~~~~~~~~~~~~~
FTC Disclaimer: Here’s my admission/disclaimer, folks: I’ve got to start writing things down. I can’t remember whether I paid for this book or downloaded it for free. I think I paid for it. But whether it was free or cost me money, I was not influenced to write a review on it, let alone a positive review. Some of you may notice that lately I’ve been reviewing more books than usual. That’s because I have an iPad. Never thought I’d say this, but I like reading on the iPad. It’s so easy. I get up in the morning before the sun wakes. I can sit in the dark living room and read by the light of my iPad. I can increase the font size, if I want. The iPad remembers the page where I left off. The iPad, I’m beginning to believe, is a cousin of Ben, Raven’s co-pilot. It just isn’t as animated or tall as Ben. And, like Ben, it’s not human. Or…is it?
Posted by Helen Ginger at 5:00 AM