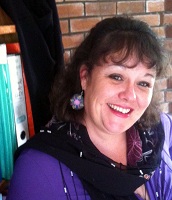 Lauri Kubuitsile is an award winning, full time writer living in Botswana. Her short stories have been published on four continents and she has 14 published works of fiction, primarily for children. (You can read my review of her book, Signed, Hopelessly in Love.) She’s also written six textbooks, two television series and numerous radio scripts. She has twice won first place in Africa’s prize for children’s writing, The Golden Baobab. Most recently she was shortlisted for The Caine Prize.

Recently, she set off on a book tour and graciously agreed to make Straight From Hel one of her stops. I’m asking her some questions, and I hope you’ll have some of your own to ask in the Comments Section.

When you started writing Signed, Hopelessly in Love, was the ending already decided or did the full plot develop as you wrote?

The thought that was the seed of this book was how we make mistakes and how we think they’re the end of the world when they’re really not. And how this is amplified by a million for teenagers. Everything they do seems to be wrong and they’re absolutely positive everyone in the world saw it and are having a grand time about it at their expense. But the truth of the matter is usually very different. That’s what I wanted the book to be about. So in that sense, I knew the ending, I knew she would find her way to the other side and see that it wasn’t quite the end of the world as she had thought. So how to get from A to B was the complicated part, the work of writing the book. There was some pre-planning, and some plot development along the way; this is the normal way I approach books. I need a guide but I’m not a slave to it if I find the plot going elsewhere.

I really enjoyed Signed, Hopelessly in Love. When you wrote it, did you channel your teenage self a bit? If so, which character did you relate with most?


Amo was definitely me. I had a huge, mammoth crush on a guy on the football team two years ahead of me in school. He didn’t even see me. I was invisible. And yet I had this whole drama built around our interactions. For example, I’d pass him in the hall while laughing with my friends and for weeks I’d fret about how stupid and childish I must have looked. But like I said, I was invisible to him. It was an entire universe in my head. So I could definitely identify with Amo.

I love that Amo had a definite character arc over the course of the book. Will there be a future book with Amo and Nono ?


When I hear terms like “character arc” I shake a bit and my palms start to sweat. I know what such terms mean but- I need to lay myself bare here- I really am an instinctual writer. I’ve been a story addict since birth, so the story format has become part of my DNA, I occasionally get things right but by complete accident. I’m glad Amo has a complete character arc but anything that happened in that direction was not purposefully guided by me.

Every stop on this book tour people have asked me about a sequel, so I think it may be a good idea. Initially, as soon as I finished the book, I wanted to write a second one. I had a very good idea that I was sure would work, but didn’t write it down and have forgotten it a bit. (Be that a lesson for all of you writers out there- write it down!) Then it was all about getting it published, and this you know takes time, so things have grown a bit cold. But who knows? Maybe that’s better. As a reader I love series, so perhaps.

Thank you so much, Lauri.

Signed, Hopelessly in Love is a Young Adult book published by Tafelberg, a South African publisher. You can find it online. Check the review I did on Monday for links to online places where it’s available.

Before you zip away, leave a comment and/or question, please.
Posted by Helen Ginger at 5:00 AM